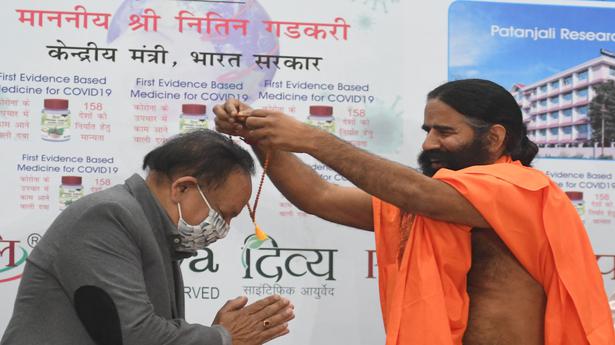 The Indian Medical Association (IMA) on Saturday demanded that the Health Ministry take strong action against Mr. Ramdev for allegedly misleading the public through his statements. In a statement, the Association said Mr. Ramdev should be prosecuted under the Epidemic Diseases Act as ‘untutored’ statements are “a threat to the literate society of the country as well as to the poor people falling prey to him”.

The Association, citing a video circulating on social media, said Mr. Ramdev was seen saying “allopathy ek aisi stupid aur diwaliya science hai… [allopathy is a stupid, bankrupt science]”. The Yoga guru also claimed “lakhs of people have died after taking allopathic medicines”, the Association said, adding that Mr. Ramdev claimed Remdesivir, Faviflu and all other drugs, which were approved by the Drugs Controller General of India, have failed in the treatment of COVID-19 patients.

The Patanjali Trust in a statement on Saturday denied the IMA’s allegation and claimed that Mr. Ramdev was merely “reading out” a WhatsApp forward and that the Yoga guru had “utmost regards” for doctors.

Mr. Vardhan, in a letter in Hindi and issued via the Ministry, said he ‘hoped’ Mr. Ramdev would withdraw his comments on doctors and the role of ‘allopathy’. He said Mr. Ramdev’s explanations were unsatisfactory and that his comments demoralised medical practitioners as well denigrated the role of the several medicines and vaccines that were helping the world deal with the pandemic. “You should be aware that like in India, several medics and healthcare professionals around the world have sacrificed themselves in their fight against the virus. Your comments have not only hurt doctors but also people everywhere and your explanations are unsatisfactory.”

Mr. Vardhan has previously shared the stage with Mr. Ramdev in promoting Coronil, an Ayurvedic tablet, that has no proven benefit in improving patient outcomes in those sick with the coronavirus. Mr. Vardhan has previously written acerbic letters criticising leaders in Opposition States in Maharashtra and Chhattisgarh for their handling of the pandemic as well former Prime Minister, Manmohan Singh, over vaccine policy. The letter to Mr. Ramdev, which wasn’t translated to English, while sharp was considerably more polite.

“Ramdev deserves to be prosecuted for causing danger to the lives of many by making them believe not to take the advice of allopathy doctors. If Health Minister Harsh Vardhan is not taking suo motu action, we will be forced to resort to democratic means of struggle to propagate the truth to the common man and knock on the doors of the judiciary to get justice,” the Association had said.

I am sure Taliban will support cricket in Afghanistan: Lalchand Rajput | Cricket News – Times of India