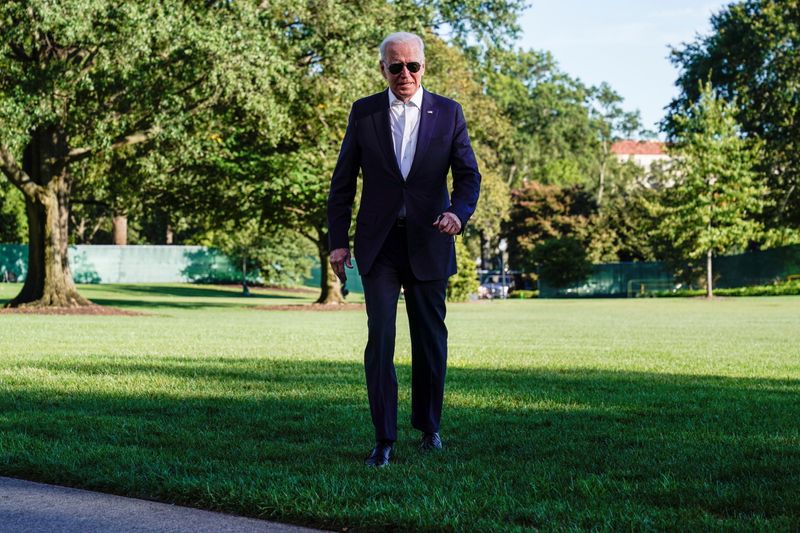 WASHINGTON (Reuters) – U.S. President Joe Biden and his top aides on Tuesday pushed members of his own party to fund not just infrastructure but his broader agenda as talks over bills for both intensified.

Biden met privately with lawmakers, including conservative Democratic Senators Kyrsten Sinema and Joe Manchin, who have balked at the size of the spending packages under consideration.

Those meetings at the White House came as Congress wrestled over a $1 trillion roads, bridges and pipes bill that has drawn support from some Democrats and Republicans, as well as separate legislation making $3.5 trillion of investments in childcare, healthcare and housing.

Jen Psaki, the White House press secretary, told reporters after a meeting with Sinema ended without an apparent final agreement that the two Democrats had “agreed that we are at a pivotal moment.”

Biden, she said, “asked his team to follow up later this afternoon with her directly to continue the conversation” but declined to comment on how far talks had progressed.

Leadership in both chambers privately tried to beat back concerns from Democrats about whether they stand on sufficiently firm political footing to pass both bills, as well as a set of emergency measures keeping the government from shutting down and defaulting on its debt.

Government funding is set to expire on Thursday. Its borrowing authority is due to run out on Oct. 18.

A poll released by the Peter G. Peterson Foundation, a think tank, on Tuesday found bipartisan support for many of the tax increases Democrats have proposed to pay for the $3.5 trillion bill. Those measures include levies on companies’ foreign income, increased Internal Revenue Service enforcement and a commitment to only raise taxes on people making more than $400,000 per year.

With the exception of some Senate Republicans breaking ranks to boost the infrastructure measure, they have largely lined up against Biden’s spending agenda, as well as raising the nation’s $28.4 trillion debt limit to pay for programs already passed by Congress.

Democrats, meanwhile, control the Senate and House of Representatives by only narrow margins and are divided on the best way to use that power before elections next year.

That has left Biden and his allies on Capitol Hill with the task of convincing virtually all of his party’s delegation to support him.

“It would be a dereliction of duty for us to build the infrastructure of America without doing so in a manner that addresses the climate crisis significantly,” House Speaker Nancy Pelosi told colleagues. “To do so, we must pass the Build Back Better Act. As I write this to you, negotiations are being led by President Biden to advance his vision.”

Disclaimer: Fusion Media would like to remind you that the data contained in this website is not necessarily real-time nor accurate. All CFDs (stocks, indexes, futures) and Forex prices are not provided by exchanges but rather by market makers, and so prices may not be accurate and may differ from the actual market price, meaning prices are indicative and not appropriate for trading purposes. Therefore Fusion Media doesn`t bear any responsibility for any trading losses you might incur as a result of using this data.

Fusion Media or anyone involved with Fusion Media will not accept any liability for loss or damage as a result of reliance on the information including data, quotes, charts and buy/sell signals contained within this website. Please be fully informed regarding the risks and costs associated with trading the financial markets, it is one of the riskiest investment forms possible.

Money in 2030: A future where DeFi and CBDCs can work together By Cointelegraph